The Interregional Olive Producers Association (AIPO Verona) is an organization of planning, technical and agronomic consultancy, at the service of associated companies and their cultural and professional growth. The correct and timely phytosanitary defense is one of the fundamental conditions for obtaining flawless productions both in terms of quality and quantity. The damage produced by pathogens that attack the olive tree can be summarized:

Therefore, any parasitic attack if not controlled, negatively affects the productivity and quality of the fruit. In particular, the olive fly, Bactrocera oleae (Gmelin), a Diptera spread throughout the Mediterranean area, is the most harmful and dangerous insect for olive groves. Primo Principio and AIPO Verona are united for a technical collaboration aimed at demonstrating, through a multi-year pilot project, the benefits of WiForOlive for the collection and processing of agro weather data in the olive field.

With the entry into force of Directive 128/2009 on the sustainable use of agrochemicals, of the Legislative Decree of 14 August 2012, No. 150 and of the Decree of 22 January 2014 on the sustainable use of plant protection products, farms are required to apply a defense low intake of plant protection products following the criteria of integrated defense. In this sense, a fundamental aspect for the adoption of eco-compatible defense systems is that which provides for the monitoring and forecasting of the population density of parasites through forecasting models and related DSS software to support decisions.

To effectively achieve its agro-technical support objectives for companies on the issue of integrated pest management, AIPO Verona realizes, through WiForAgri, a territorial agro-weather monitoring and decision-making support on the optimal time to perform phytosanitary treatments. The aim is to support producers in realizing a real integrated fight against the oil fly, protecting the quality of the product and the environment, reducing the number of treatments but optimizing their timing and punctuality for each micro-territorial area.

How does it work?

In summary, the implementation of the project is based on the following actions.

The comparison between simulated and observed population dynamics allows the improvement of the DSS model annually through its calibration on a micro-zone. 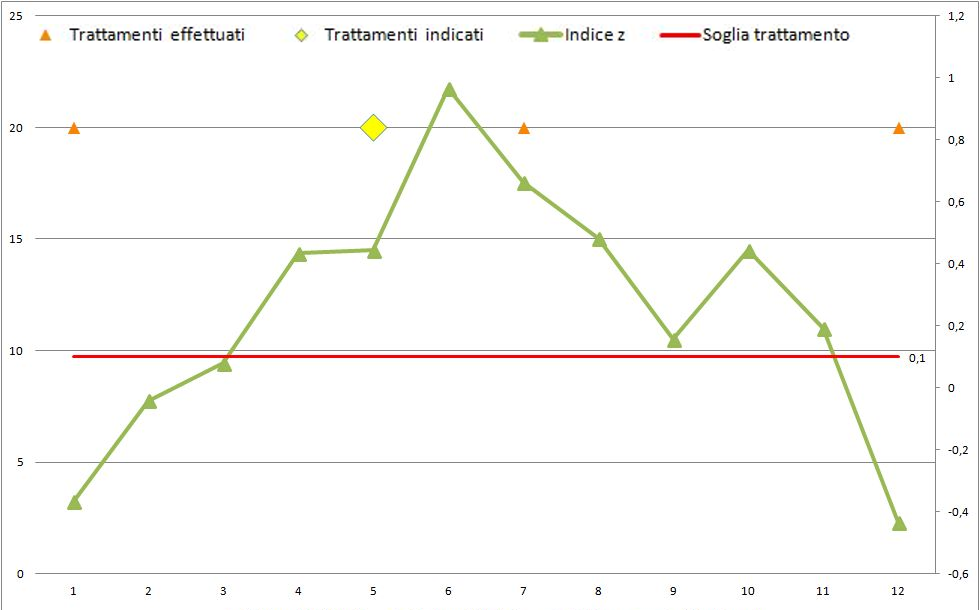 The pilot project has the task of demonstrating the possibility of reducing and optimizing the treatments according to the actual need identified by the DSS forecast models and validated through the analysis of various environmental factors. In this way, moreover, by optimizing the punctuality of the treatments (although performed in lesser numbers) the risk of losses in the harvest and in the quality of the final product is reduced ; consequently plant protection costs and environmental impact are reduced.

The developed model allows us to accurately predict the dates of the peaks of the different phenological stages for the individual generations, managing to estimate the moments of maximum infestation with a maximum difference of less than a week compared to what was observed in the field. To optimize the reliability of the model, in relation to the forecast of population abundance, a validation campaign is still ongoing on a larger sample of experimental fields.

In particular, in some cases in which the farmers actually performed a calendar defense, the use of the DSS model has made it possible to reduce the treatments by up to 50% in a year (see comparative graph between the treatments usually performed and those indicated / necessary), reducing the environmental impact and at the same time increasing the real protection on crops.